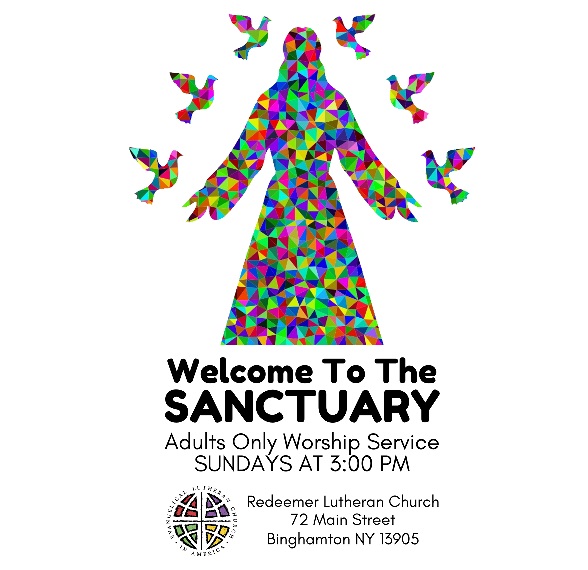 This is an Adults Only (18 or older, no children) church service held in the Centennial Hall of the Church (church basement) at 1:30 PM each Sunday. There is a sign out on the sidewalk by the side entrance so you know which door to go through to get in.  This service is for those in the community with troubled backgrounds that may not feel ready or comfortable attending a regular church service due to legal, mental health, addiction, probation, parole, or insecurity issues.  No one is beyond the redeeming love of God.

This service is a safe place to worship God; where a person will be accepted for who they are; a place where their background will not hold them back from participating; a place to feel at home; to make friends, and be part of a church family.

We encourage members of the regular congregation to participate or attend to experience what you are supporting and to see what the Holy Spirit is doing here. This is a very welcoming, loving, supportive, non-judgmental service. You can feel the Holy Spirit in this small but growing service. If you have felt out of place or rejected by other faith services for any reason please come.

The worship style is non-traditional, we have an evolving format. The service content varies, some are healing services, Communion is served most Sundays, some have attendee participation in faith discussions based on readings from the Common Lectionary, or occasionally testimonials are given by members about how God has changed their lives. There are usually 4 to 5 upbeat worship song videos, and always prayer. The service is lead by one of the Deacons.

This is a relaxed service, there are usually drinks, snacks, and sometimes meals to share before or after service, (No snacks currently due to Covid restrictions, hopefully again soon.  Physical distancing is practiced and masks should be worn by those not yet fully vaccinated).

You can join this service via Zoom if you do not feel safe due to Covid or if you cannot attend in person for other reasons.

Below is the text of an article about how this service started published April 23, 2014, in “Living Lutheran”.

A year and a half ago, a man knocked on the door of Redeemer Lutheran Church looking for help. Barbara Hayden, pastor of the congregation, offered him assistance and watched him walk away. For nearly a year, the man did not come back.

This was not an unusual event in the impoverished area around Redeemer Lutheran Church in Binghamton, N.Y. The man’s return, and his conversation with Barbara, though, was very different. “I wanted to let you know I was in jail,” he told her. “I didn’t just disappear.”

Over time, the visitor became part of the community at Redeemer. He was an “incredible worker,” according to Barbara, and she often found him on his hands and knees cleaning the kitchen and other spaces of the church building for little or no pay. Following his time in jail, the man had a difficult time finding a job or an apartment, and Barbara often drove him to interviews. With no job and little money, he ended up in an apartment and, very soon, back in jail. He asked the jail chaplain to call the only person he could — Pastor Hayden.

Within days, newspapers printed the scandalous details of his crime: the forcible rape of a neighbor, his prior convictions and status as a sex offender, his previous violation of not providing police with an updated address for his registration. Soon, parishioners at Redeemer were asking Barbara difficult questions: “Did you know he was a sex offender?” Indeed, she did; he had told after returning from his year-long absence. She, in turn, “hadn’t turned a blind eye,” but had informed several other people at church. That night, at a regular council meeting, Barbara pointedly asked the members, “Is this going to be an open church, or a closed church?”

“Without even the blink of an eye, they responded, ‘Of course we’re going to be open; everyone needs the Lord,’” recalled Barbara.

Thus began a new ministry at Redeemer, a church that nearly closed its doors only a few years before; they would begin serving with and among registered sex offenders. The first step the congregation took was to talk about a policy for registered offenders, which included providing mentors so that “everybody — including the offender — is safe.”

While she had the support of the Congregation Council, getting the rest of the congregation on board was not easy. “There was a lot of hardness of heart among the people, including me,” Barbara said.

Yet, when a Level 3 offender spoke to the congregation, Barbara said you could “watch faces just soften.” She and the members of Redeemer came to see the humanity that lay behind the legal status. “They weren’t those people; they had names. They were people, real live people — people searching for the Lord.” Listening to the offender’s story, “it began to hit me,” Barbara says. “It is easy to objectify them — those “sex offenders” — but when they’re people [well,] Jesus hugged the leper. And I know God has forgiven a whole lot in my life.” For Barbara and the members of Redeemer, a change of heart had begun.

Once the ministry started, “it took off like wildfire.” The first challenge that arose was how to welcome offenders who legally cannot be around children. Redeemer began planning an adults-only worship service. Despite some lingering concerns, the council “was very open to it.” And they weren’t the only ones. Soon, Barbara was fielding calls from the jail chaplain, probation and parole officers, and re-entry program staff. She invited the offender who shared his story to speak with local ELCA pastors, and they were “blown away” by his testimony and “thrilled” that Redeemer would start a special service for other offenders.

This new journey has raised other questions for the members of Redeemer and for Barbara, a former deaconess who was ordained in 2013.

Seeing the challenges that face former offenders, Barbara has started to question offender registry laws and obstacles to successful re-entry after incarceration. As a result, she is now on the board of community groups working on issues of re-entry. The excitement and support she has found at Redeemer and in the community around Binghamton encourages her to keep fighting against misconceptions and suspicions about registered offenders.

“Fear is the big word,” Barbara says when asked about obstacles to starting this kind of ministry. Hearing the stories of offenders, though, can reduce this fear, especially when thinking about the actual crimes that lead to mandatory registration. Being a registered offender is like having “a scarlet letter for the rest of your life,” regardless of the circumstances of the crime.

Easter is for healing and hope

The first adults-only service at Redeemer will be held, appropriately, on Easter Sunday, the day in early Christian communities when new members were baptized and welcomed into the community. As to her expectations for the service, Barbara candidly admits, “We have no idea what’s going to happen here.” Her hope, though, is “that this does become like wildfire, and maybe it’s going to help sex offenders outside of Binghamton, N.Y. And maybe it can change the world.” It certainly has had an impact on the man who knocked at the door of the church that day. “One thing he keeps saying is ‘You believed in me, so I keep going.’ You have to have someone believe in you.”

There is excitement, energy and a fair amount of trepidation at Redeemer — Barbara fears the church “being targeted” for being open to offenders — but there is also a lot of hope and faith. As plans for the service continued to develop, a woman approached Barbara and told her, “I hear you’re having this alternative service. I’m a victim of a sex offender. But I’m going to come, because I feel like I can be healed there, because we’re all going to be at the same table together.”

With tears in her eyes and hope for the future of Redeemer Lutheran Church, Barbara describes an emerging ministry at a passionate church in a community filled with opportunities and challenges. “God wanted me there,” she says. And the will of the congregation to remain open is a sign of hope; as she tells members, “lives will be changed because you refused to close.”